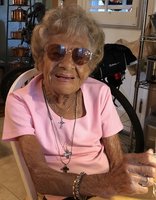 Edie was born to the Alfano family and lived on Cliff Street in Cliffside Park for 34 years. She married William Moppert after WW II and had two children, David and William. In 1963 the family moved to 5th Street in Ridgefield Park for 29 years. Edith volunteered at Lincoln School in Ridgefield Park

Edie and Bill moved back to Cliffside Park in 1992. Edie volunteered at the senior building kitchen, In 2018 Edith moved into the home of her son and daughter-in-law David and Francesca. Edit spent her time between Woodcliff Lake, NJ and New Port Richey, FL. She loved Cliffside Park, old classic shows and movies, and cooking shows. Mom will be dearly missed.

In lieu of flowers the family requests you plant a yellow rose bush in memory of Edith.