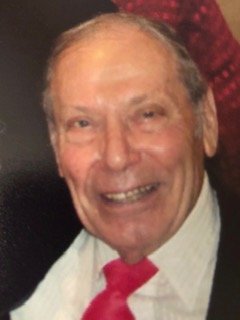 Please share a memory of Marco to include in a keepsake book for family and friends.
View Tribute Book
Marco “Mark” Napolitano was born in Fairview, New Jersey to an immigrant father, Umberto and his mother Mary La Salle. Mark grew up with his sisters, Jeannie, Rosie, and Alice and attended the local public schools. He graduated from Cliffside Park High School. After high school he was employed by a local seafood store and learned a trade. Later he took that skill and went on to become a butcher at Food Fair. However, in 1953 Mark was drafted into the United States Army, where he served for several years. Mark enjoyed army life and had considered making the military a career. After sometime he decided instead to join the Fairview Police Department, where he eventually retired as a Police Lieutenant after a long career. While employed as a policeman he met his soon to be wife, Angelina Locantore. Mark and Angelina enjoyed over 50 years of marriage and raised three children; Maryann, Janet and Albert. After retirement, Mark became active in many different organizations. He joined the Fairview Volunteer Fire Department and years later volunteered alongside his son. He had been a long-time member of the VFW & the American Legion of Fairview. In 2016 he was bestowed the honor of VFW Man of the Year for his years of dedication. Mark also found time to become a member of the Korean War Vets, where he met many men, he was proud to call friends. Mark was a master mason at Euclid Lodge, Hasbrouck Heights, NJ. In his leisure time he spent many hours in the backyard, tending to his flower garden. He loved all antique items, especially cars and spent many hours in the local library researching his passions. Marco lived life to it's fullest everyday and enjoyed many different hobbies, however, what Mark liked best was spending time talking to people and spending time with his family. Visitation will be on Sunday January 5, 2020 at McCorry Brothers Funeral Home from 2-6 PM. Burial to follow on Monday January 6, 2020 in Fairview Cemetery.
To send flowers to the family or plant a tree in memory of Marco Napolitano, please visit Tribute Store
Sunday
5
January

Share Your Memory of
Marco
Upload Your Memory View All Memories
Be the first to upload a memory!
Share A Memory
Send Flowers
Plant a Tree