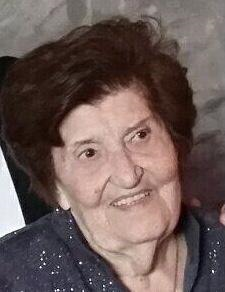 Please share a memory of Antonia to include in a keepsake book for family and friends.
View Tribute Book
Antonia Capilla, (née) Monticolo, of Cliffside Park, NJ, age 96, passed away peacefully surrounded by her loving family on April 23, 2021. Beloved wife to the late Giuseppe (2004). Antonia was born on July 24, 1924, in Umago, Italy and came to the United States in 1956 with her loving husband Giuseppe and son Livio after having been forced to leave their birthplace as a result of the after effects of WorldWar2. Soon after embarking in their new life in the US, they welcomed their daughter Annamaria. Antonia was proud to have worked side by side with her husband for Maxwell House Coffee Co., in Hoboken, NJ for many years. Antonia made sure to return yearly to her beloved city of Trieste, Italy, to be with her parents and relatives. One of Antonia’s greatest joys was being the consumate hostess of countless parties given in her beloved basement party room. Subsequently, their circle of friends grew exponentially enough to warrant the formation of their own Social Club, otherwise known as Club delle Luganighe, which continued for many happy years thereafter. Devoted mother to Livio Capilla and his wife Rosanna, Annamaria and her husband Giovanni DeMartino. Cherished grandmother to Erica Brownsberger and husband Doug, Claudia Capilla and Daniel DeMartino and his wife Nicole. Adored “bisnonna” to Brooke Brownsberger and Gianna DeMartino. Visitation will be held on Tuesday April 27, 2021 from 4-7 PM at McCorry Brothers. Family and friends to gather at McCorry Brothers on Wednesday April 28 at 9 AM. Funeral Mass to be celebrated at St. Matthew's R.C. Church 555 prospect Ave., Ridgefiled NJ, for Mass of Christian Burial at 10 AM. Entombment to follow at Madonna Mausoleum Fort Lee, NJ.
To send flowers to the family or plant a tree in memory of Antonia Capilla, please visit Tribute Store
Tuesday
27
April

Share Your Memory of
Antonia
Upload Your Memory View All Memories
Be the first to upload a memory!
Share A Memory
Send Flowers
Plant a Tree