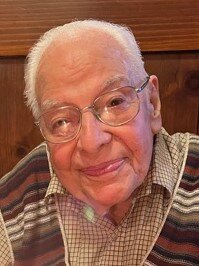 Emil Bongiovanni, age 99, of Warren, NJ, devoted husband, father, grandfather and great-grandfather, passed away on October 21, 2021.  He married his beloved wife, Gloria, on November 25, 1948 and they enjoyed 71 years of a wonderful marriage. They lived most of their lives raising a family in Ridgefield, NJ, where he was also involved in various community service organizations.  In recent years, they moved to Warren, NJ, to be closer to their granddaughter and family.

Emil served in the medical corps under General George Patton in the European theatre of World War II. He studied pharmacy / pharmacology at various schools in the U.S. and abroad, including Rutgers University in NJ and Cambridge University in England. He worked as director of hospital pharmacy for many years, taught pharmacology and loved the field of medicine.  He was an avid reader, enjoyed classical music and above all, cherished his long marriage to his beloved Gloria.  He was a man of faith and service to others, devoted to his wife and family, and a man of strong integrity.

Emil is survived by his two children, Joan Truncali of Portland, OR and Robert Bongiovanni of Cape May Courthouse, NJ.  In addition, he has three grandchildren, two great-grandchildren and an extended family of loving nieces and nephews.

In lieu of flowers, donations may be made to:  Doctors Without Borders at http://donate.doctorswithoutborders.org; or Guide Dogs for the Blind in San Rafael, CA at www.guidedogs.com.  Private funeral arrangements will be coordinated by McCorry Brothers Funeral Home in Cliffside Park, NJ.

Share Your Memory of
Emil
Upload Your Memory View All Memories
Be the first to upload a memory!
Share A Memory
Plant a Tree