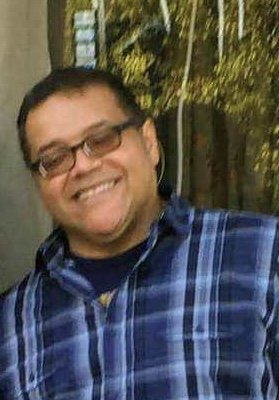 Please share a memory of Abner to include in a keepsake book for family and friends.
View Tribute Book
Abner was born on September 1, 1958 in Bronx, New York City. His parent were Josefa Rodriguez and Ramon Martinez. Abner was the son of an Evangelist Reverend and both from Puerto Rico. Based on this upbringing and the mix of environments taught Abner to respect diversity. Abner grew up as a shy and kind person. His life was a sanctuary of peace and respect to all. Abner grew up among fabled autumn foliage and the melting pot of New York City. Abner then left six grade, PS 212, to Arecibo, Puerto Rico with his family. Abner knew little Spanish and barely any writing, but in Sabana Hoyos, Sector Carolina he learned fast to acquire the skill. Abner is fluent in English and Spanish. Destined to become a law-enforcement Security Officer he made his career of 34 years with then Beth Israel Medical Center (currently Mount Sanai/Beth Israel.) Abner was not afraid of manual labor and learned construction leaving his name paved in his father’s house in Puerto Rico. He worked with the Suiza Milk Company and never dropped a glass bottle. Upon becoming one of the Union Leaders, it was not easy to find a venue for everyone. During arbitration there were many refusals, but everyone had a fair hearing. No problem, Abner’s invitations read “Everyone, I’m here to fight for you.” Lynah, also from New York City, was love at first sight while both met in an emergency room. They decided to marry in NY and were there for each other until December 31, 2020, a life of intimacy, friendship and wholeness for 33 years. Abner was blessed with his first child, Amanda, and later Abner “Scotty” his son. Abner had high standards, especially the day he and his brother Peniel dressed up in fine suits for his job interview. The director was so impressed with his eloquent etiquette and style that hired him on the spot on June 1, 1986, Beth Israel Medical Center. Everyone enjoyed Abner’s laughter, and as a family man he enjoyed the love of his life, Lynah, children, grandchildren, playing dominoes, delicious meals and working overtime. Abner is a biblical name meaning “my father is a light” and a commander of Saul’s army. There is some similitude to our Abner because when he walked in... you felt command presence. Abner was ambushed by health problems, and his life never changed being a good son, brother, husband, father, grandfather, and friend. Everyone loved him. He was that guy who had a positive outlook of life and his selfless steadfast family and friends just loved him. Abner was so reliable to all. Abner never surrendered his soul. He loved work and live life to its fullest. His health may have drifted off, but Abner will remain with us forever. He touched too many lives...just like he will in heaven. Dear Abner, you have walked through the valley of the shadow. May the angels lead you into Paradise with Mom, Dad, Deborah, Hesbon, Siria and Saphan-may you have eternal rest. Abner leaves his wife Lynah, daughter Amanda, Son Scotty, grandchildren Max & Nathaniel, brothers Urias, Keilas, Israel, Nicodemo, Peniel, and Sisters Thirsa, Ithamar, and many relatives and friends. A service will be 11:00 am, Tuesday, January 5th, 2021 at McCorry Brothers Funeral Home, 780 Anderson Avenue, Cliffside Park, NJ. Interment will follow at the All Faiths Mausoleum, 234 Paramus Road, Paramus, NJ. Visitation with limitations of no more than 40 people at one time due to Covid restrictions, will be held on Sunday Jamuary 3, 2021 at McCorry Brothers from 6-8pm and Monday January 4 from 4-8pm.
To send flowers to the family or plant a tree in memory of Abner Martinez, please visit Tribute Store
Print
Sunday
3
January

Look inside to read what others have shared
Family and friends are coming together online to create a special keepsake. Every memory left on the online obituary will be automatically included in this book.
View Tribute Book
Share A Memory
Send Flowers
Plant a Tree